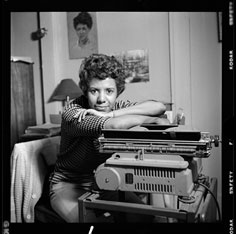 “When Hansberry brought the play to Broadway, it shed a light on racial issues in a way that had not been displayed before,” said Stacie McCormick, an assistant professor of English at Texas Christian University who specializes in 20th century African American literature. “I think it was refreshing for black people to see images of themselves. That was a transcendent moment.”

The legacy of her powerful literature still resonates with readers today, but her personal story is far less known.

The new American Masters documentary Lorraine Hansberry: Sighted Eyes/Feeling Heart will feature an in-depth presentation of Hansberry’s complex yet fascinating life. The documentary portrays the writer’s lifetime dedication to fighting injustice and how she found her way to using art as her platform for activism during a crucial time for black civil rights. The film also features personal memories of Hansberry from family, friends and colleagues.

McCormick believes Hansberry’s work gave readers an idea of how to achieve the American dream even when it is being denied.

“We can look back at her hopeful critique as a model for how to think about negotiating the present reality of today especially for people of color,” said McCormick. “She really spoke from a place of justice and I think she really is instructive for those who are still advocating for justice today. She’s just as important now as she was then.”

The premiere of this film came a week after the start of KERA’s own Race In America Film Series. KERA will present two more film screenings and conversation events in coming weeks to facilitate a deeper understanding of American minority experiences.

Are you a teacher, homeschool parent or other educator?
• Get educational toolkits for teaching race in American history and culture
• Follow KERA Learn! on Pinterest